"...the only conclusion that we can reach to explain the presence of Bible passages which match the King James Version is that the Lord revealed them to Joseph in that manner. We do not know the reason for this."

"In terms of attempting to pinpoint the origin of the Book of Mormon, even more significant than Book of Mormon revisions are places where it follows the KJV into error, echoing mistranslations or including translations of late and derivative Greek texts. Certainly the Book of Mormon should not have the same errors which displaced the original and crept into the text over the centuries. Since to plagiarize means to appropriate and use, without acknowledgment, the words of another, one must here use the term—as harsh as it may sound—to characterize Smith’s dependence on the KJV. The Book of Mormon account of Jesus’s sermon in 3 Nephi 12-14 originated in the nineteenth century, derived from unacknowledged plagiarism of the KJV. Smith copied the KJV blindly, not showing awareness of translation problems and errors in the KJV. Yet the Book of Mormon is not a slavish copy of the KJV—there are numerous words deleted, revised, or added to the text. Rather than translate from an ancient document, Smith seems to have quoted from Matthew 5-7 of the KJV and to have made certain revisions as a response to the English text of the KJV.

The Book of Mormon cannot be exempted from such textual criticism by emphasizing that translation inevitably introduces elements from the translator’s environment. The Book of Mormon describes a process of transmission which is not that far removed from certain other texts. The Book of Mormon claims to be an English translation from a text on gold plates inscribed by Mormon using “reformed Egyptian” (Morm. 9:32) in the fourth century but derived directly from contemporary records written in the Nephite language in 34 C.E. The transmission of the New Testament manuscript known as the Sinaitic Syriac parallels that of the Book of Mormon—at least for the first two stages. The Sinaitic Syriac, which was discovered in the late nineteenth century, is a palimpsest or manuscript in which the original writing has been scraped off and other writing placed on top. This fourth-century Syriac manuscript contains a late second-century translation from the original Greek of the New Testament, which in turn is assumed to be a translation of the Aramaic words of Jesus. The manuscript was translated into English in the late nineteenth century. Naturally the underwriting of the Sinaitic Syriac has certain identifiable scribal errors and unique readings, which may or may not represent the original text. Still the English translation can be shown to represent a very early stratum of the developing text of the Sermon on the Mount, almost always supporting the earliest known Greek texts and not the Textus Receptus (Lewis 1910). If it translates an ancient text, the Book of Mormon similarly should fit into its historical context, even if one views it through an English translation."

Stan Larson, The Historicity of the Matthean Sermon on the Mount in 3 Nephi 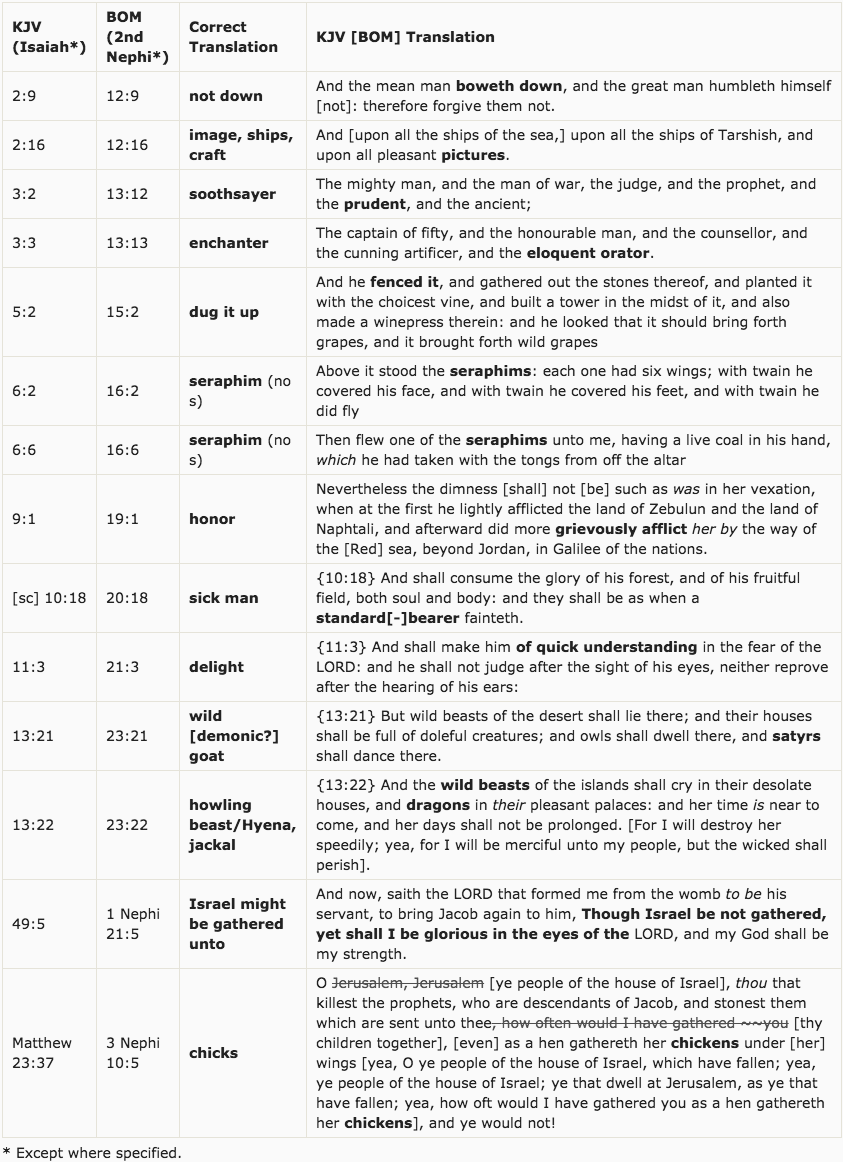 Joseph strictly used a rock in a hat for the Book of Mormon "translation" (more like dictation).

Joseph didn’t translate the Book of Mormon. He put his face in his hat looking at his peep stone and the words appeared. The Mormon god was in effect dictating the words to Joseph.

“Joseph Smith would put the seer stone into a hat, and put his face in the hat, drawing it closely around his face to exclude the light; and in the darkness the spiritual light would shine. A piece of something resembling parchment would appear, and on that appeared the writing. One character at a time would appear, and under it was the interpretation in English. Brother Joseph would read off the English to Oliver Cowdery…when it was written down and repeated to Brother Joseph to see if it was correct, then it would disappear, and another character with the interpretation would appear.”
– Russell M. Nelson quoting Book of Mormon witness David Whitmer in A Treasured Testament, New Ensign 1993.

In the LDS Church’s Book of Mormon Translation essay, they write:

“According to these accounts, Joseph placed either the interpreters or the seer stone in a hat, pressed his face into the hat to block out extraneous light, and read aloud the English words that appeared on the instrument.”

Later in the same essay, they write:

“Another scribe, Martin Harris sat across the table from Joseph Smith and wrote down the words Joseph dictated. Harris later related that as Joseph used the seer stone to translate, sentences appeared. Joseph read those sentences aloud, and after penning the words, Harris would say, “Written.”

This is a tight dictation. There is no room in this tight process for 1769 KJV edition errors to show up or for all the problems that later required over 100,000 changes to the book (significant and insignificant). It was a “word-by-word, we’re not moving along unless you get it right” dictation from the Mormon god himself.

Since the Mormon god was dictating to Joseph in his hat “word-by-word, we’re not moving along unless you get it right” dictation, it should be perfectly accurate and the original Book of Mormon should therefore be the perfect literary document. In other words, it should be just as Joseph claimed it was: “the most correct of any book on earth.”

In reality, the original text and current text of the Book of Mormon is a mixture of nineteenth-century nonsense, plagiarism, and selected existing KJV scripture verses including its 1769 KJV edition errors as well as 17th century italics made by 17th century translators. The Book of Mormon is now the product of over 100,000 changes over the years – some insignificant and some significant.

“I believe that members and investigators deserve to have all of the facts and information on the table...to be able to make a fully-informed and balanced decision as to whether or not they want to commit their hearts, minds, time, talents, income and lives to Mormonism. Anything less is an obstruction to the free agency of the individual.”